Documentation of work in progress "What Dreams May Come", (2009) 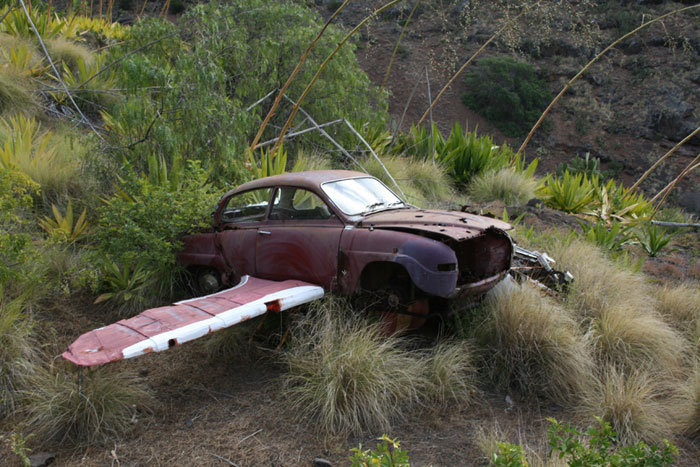 This is the car driven by Napoleon during his exile on the Island of St Helena. You can find it in Breakneck Valley, empty like his tomb.

The windscreen remains clean and ready for take off, wiped from the inside, as Edmund Halley, his neck craned, eyes straining past the damaged sun-visor, attempted to observe the stars of the Southern Hemisphere.

Its horn was sounded on the way to a picnic near Fairyland. It echoed from the boughs of Norfolk Pines, pines planted to replace the masts of stricken ships. Through W road zig zags, unsuitable runways, treacherous climbs, the undercarriage held, glovebox rattling with porcelain shards and bread and dance.

Aborting take off from Man and Horse, the next journey was made through Alarm Forest, tucked safely in his little box. His socks were filled with white sand from Lot's Wife's Pond's and his nose with the scent of burnt ebony.

Napoleon took care to ensure spare hubcaps were kept in the boot.

In October 2007, Andy Parker sailed 3,991 nautical miles aboard the last remaining Royal Mail Ship, the RMS St. Helena. It was a voyage that would last for two weeks from Portland, UK, across the equator to the Island of St Helena in the South Atlantic Ocean. During this self-initiated residency he intended to focus on the way St Helenians used and appropriated the things around them, and in particular how this approach to objects might alter with the arrival of a proposed airport.

Andy Parker was born in 1978 at Portsmouth, UK and works predominantly in London. Parker studied at Wimbledon School of Art, and at the Royal College of Art, completing his MA: Fine Art in 2007. Producing work on the fringes of destruction and disappearance, Parker’s practice engages with the traces of obsolescence that abound in a culture of over-production. His paintings, prints, films and sculptural objects expose a love of physical construction and historical time. His attention to presentation techniques goes on to question use and labour values. Parker is represented by Sies+Hoke in Dusseldorf, Germany.