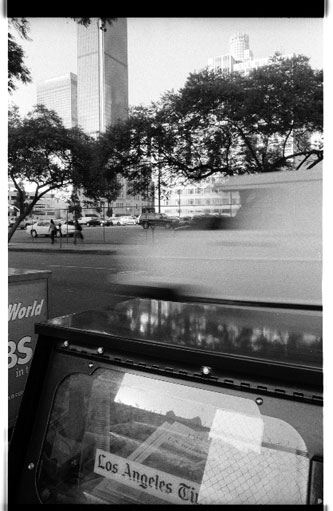 Washington- In a major strategic shift, the Bush administration has decided to pour at least $250 billion directly into major banks and expand federal insurance protection to encourage financial institutions to resume lending to one another.

Stocks soared on hopes that policymakers had finally hit on the right formula to thaw the frozen credit system and quell the financial calamity that had hammered giant banks and small investors alike. The Dow Jones industrial average rocketed more than 900 points, its biggest one-day point gain ever.

"October 4-October 14, 2008", made in 2009 by Dee Williams, is a short video composed of 35 mm black and white photographs. The photographs depict the headlines of newspapers in boxes on the streets of Los Angeles during a ten-day period, including The Los Angeles Times, The Daily News, The Wall Street Journal and others. The work examines the relationship of still photography to the representation of time.
Dee's video project is available as an editioned DVD for a $75 contribution to Material, in support of Issue Two, forthcoming this December.

Dee Williams was the recipient of a DAAD stipendium in Berlin from 2000-2002, and earned an MFA in Art from Calarts in December, 2002. Her work untitled, daguerreotype project was included in the book We All Laughed at Christopher Columbus, published by the Stedelijk Museum Amsterdam and Platform Garanti, Istanbul, 2007. Her work has been exhibited at Artists Space and Gagosian Gallery, New York, at Monte Vista Projects, ESL and Art2102 in Los Angeles, The Sweeney Gallery at UC Riverside, The Physics Room in New Zealand and Museo Nacional de los Ferrocarriles Mexicanos in Puebla, Mexico. She lives in Los Angeles.