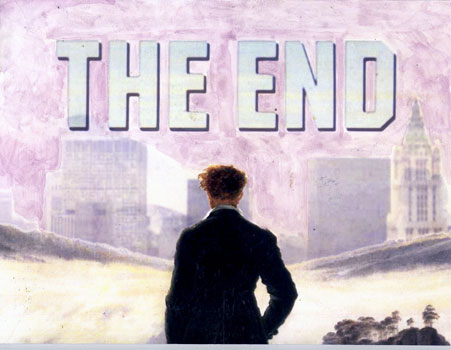 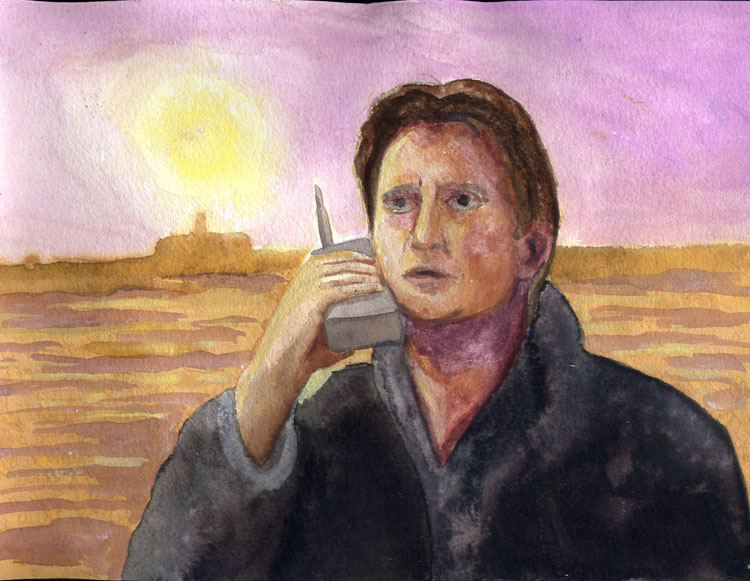 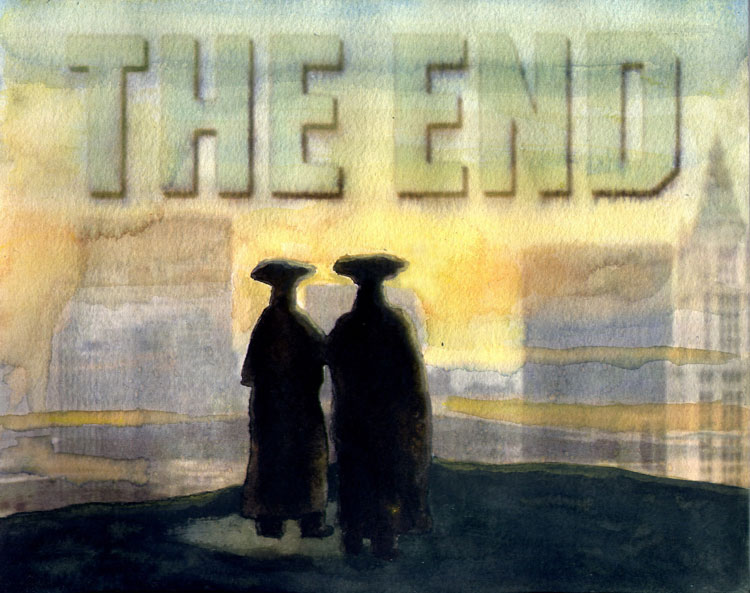 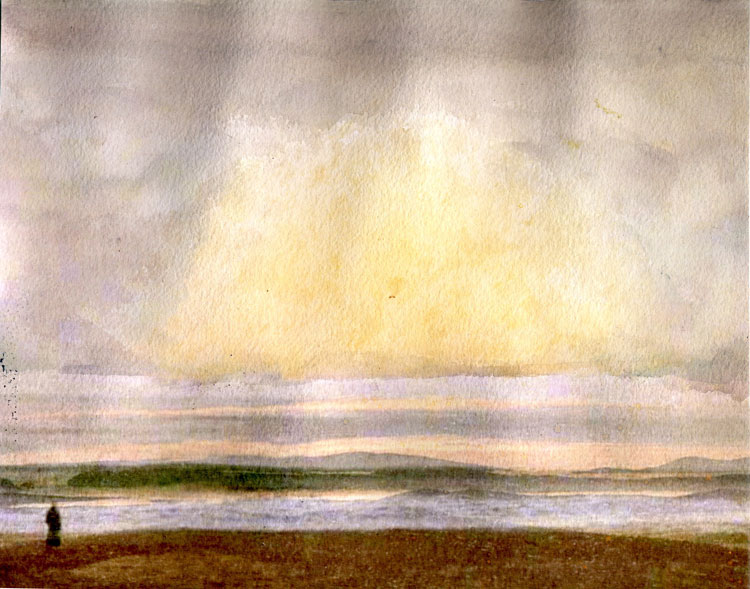 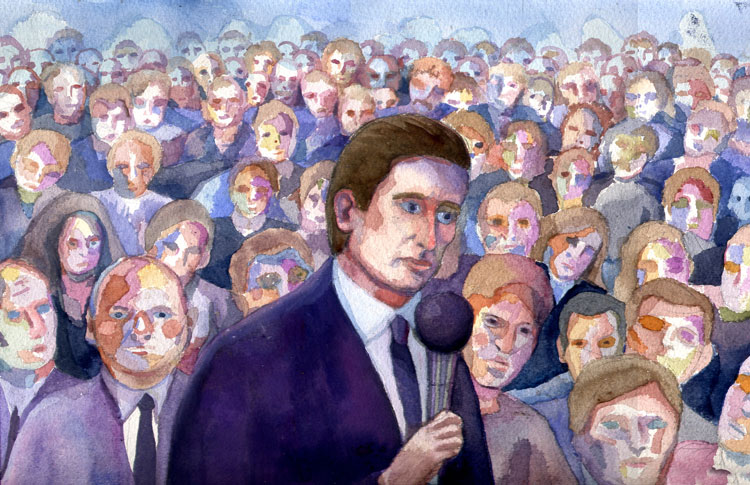 THE DIALECTICS OF WALL STREET—THE MOVIE.

A: I was watching a movie called Wall Street (1987). It’s about a young, ambitious stockbroker named Bud Fox who convinces Gordon Gecko, a cutthroat, corrupt Wall Street magnate, to be his boss/mentor. The most salient moment in the film comes when Gecko walks along the beach in early morning, talking with Bud on his dust buster-sized cell phone. He says, “Ah, I wish you could see this...light’s coming up. I’ve never seen a painting that’s captured the beauty of the ocean in a moment like this.“ Gecko is apparently in deep, spiritual reverie. He made millions the day before illegally. I was reminded of you because many of your works depict an observer staring at the sun, moon, or landscape in quiet contemplation. However, in the film, there is a subtle inversion: Gecko talks on the cell phone facing the opposite direction of the rising sun. Maybe it’s just me, but I see significance in this.

B: The significance may be projection. What is certain is that he is insane and possessed by depraved spirits. First of all, kind friend, what is a movie and what is a sell-a-phone [sic]?

A: I will explain later. Wall Street is essentially a story.

A: Yes, except that Gecko would be the antithesis of Young Werther. As for corruptive spirits, I am not sure, but he is certainly perverse. He believes that greed can replace love. Greed, as he says in the film, ‘works and defines.’ Yet, I can’t help feel that there’s a romantic streak lurking in Gecko. Attaining money by illegal means stirs great feeling in him. Let’s play a fun game: is Gecko romantische or praktische?

B: I say without hesitation that he is praktische. For a moment, on the beach, he is in awe of an ineffable force; he is in the presence of Die Romantische Stimmungslandschaft.

A: So he is in awe of nature simply because he can’t purchase it in the form of a picture, at say, Barney’s?

B: Who is this Barney? Do not doubt the power of the spirit, even if it is buried beneath a malodorous layer of cologne. He may have been subjected to the sublime, but the evidence leads to one opinion: that Gecko is cloaked in greed, which only garners intoxicating, unfulfilling fumes.

A: Accruing wealth is like eating tea biscuits. They are delicious, but my hunger never lets up and I end up eating the whole package, still wanting more. As I consume them, I believe they will make me full, only to find myself alone, wanting a turkey sandwich. Money works the same way for Gecko. It stirs great feeling and hunger in him. As Charles Baudelaire once said: “Romanticism is precisely situated neither in choice of subject nor exact truth, but in the way of feeling.” If I follow this definition, this makes Gecko strangely romantic about financial domination. Yet, he is fundamentally miserable even in wealth. His pursuit is unrealistic and extravagant, another aspect of the romantische, because money is not real.

B: You tire me with your mincing of words. Romantische people do not care about money. They care about sex, wine and mutton. If money was not real, you could argue that everything is a hallucination, which would cause the love of pork or one’s own excrement to be romantische. The world tacitly agrees that it has a praktische function. It’s a symbol but is real insofar that it grants ownership of something material, like a chateau or bratwurst.

A: One more question: on its own, is sausage romantische?

B: If I am in want of it and cannot afford it, it is romantische. If it is in my belly, it is praktische.

B: Neither. You are Half-Jewish. What becomes of this Gecko character after all?

A: He goes to jail. But we’ll see if this teaches him anything. We’ll have to find out in Wall Street 2, featuring Shia Laboef.

Max Maslansky makes paintings and drawings that primarily deal with mythology, psycho-spatial landscape, and class. He has exhibited in Los Angeles and New York and received his M.F.A from Calarts in 2006. He lives and works in Los Angeles.