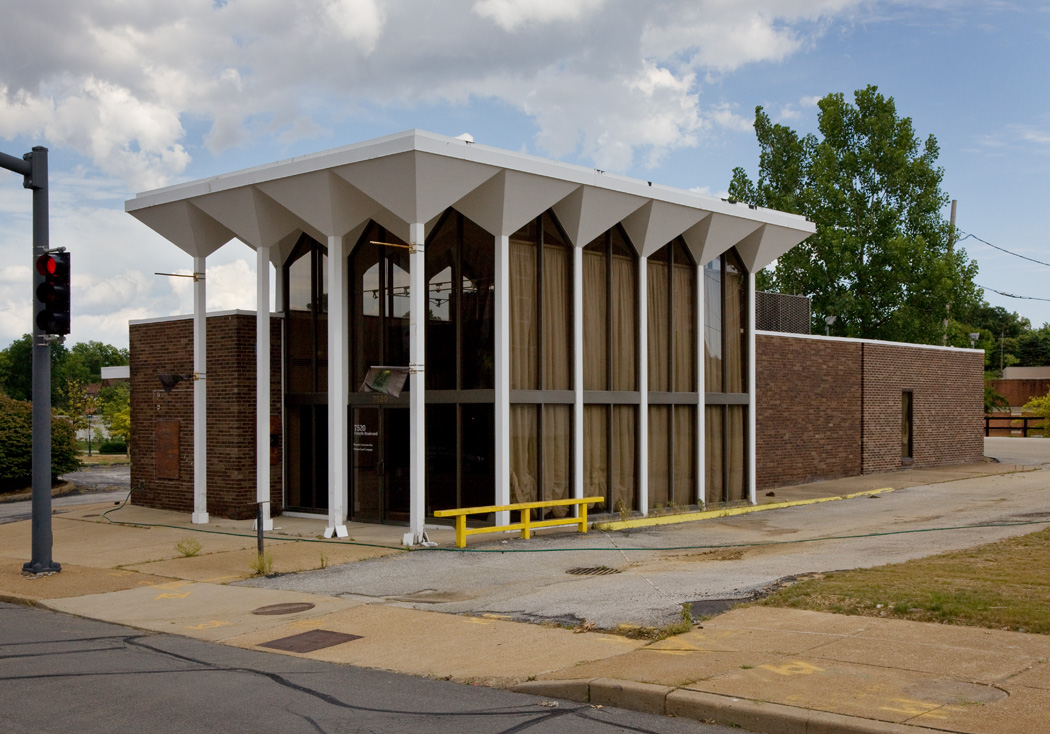 The building pictured in this photograph was part of the post-war building boom in St. Louis.  At the time of its construction a number of significant architects were giving St. Louis a new look.  A 1947 competition had resulted in Eero Saarinen’s arch, and similarly forward-thinking buildings were going up all over town.  I happened upon this scene across the street from a department store I was looking for in the suburb of Clayton, one designed by Marx, Flint and Schonne (designers of Los Angeles’ May Co. Building). This particular building is not in any of the guides I could find.  Today it is a nameless ruin.

It is a former bank.  I can tell by looking at the side you can’t see. There: two drive-up windows. The building seems to hold signifiers of a bank even without that information.  The large, airy lobby formed by the central pavilion is lined with brick and looks more like a fortress. The metal slab on the front of the brick structure covers the hole where perhaps an ATM once was located.  Nowadays no one drives up to the bank but when I was growing up we were completely taken with car culture: drive-thrus, drive-ins, drive-ups - they were all the rage.  I remember going to the bank with my grandmother in her Oldsmobile Cutlass Supreme and being very excited to talk with the woman inside, via the microphone. She was on the other side of bullet-proof glass and we had to put our withdrawal slip into one of those stainless steel drawers that slide in and out of the building.  It was hot outside and I imagined the cool, air-conditioned interior of the bank with its sense of order.  The cold, clean surfaces of capital were visible but safely contained.  The Fordist idea of production is inscribed in the architecture’s sequence of windows, enshrining both the necessity and mistrust of human interaction.

Now those windows are boarded up. The ATM was their replacement but now that’s gone too.  It’s probably no accident that this piece of architecture has been re-purposed as the office of a developer—Roloff Development Co. is its name but the name on the door says something else, leading me to believe that the company on the door went out of business and the building switched hands. It seems appropriate that development—and the instability it engenders—has replaced the brick and mortar repository for capital.   Meanwhile, the architecture that was initially functionally and symbolically tied to its use has become merely provisional.  The system to which it was essential is gone and we are left with a form that once embodied all that was new, but now tells us only of the persistence of time.

Alex Slade is an artist working in both photography and sculpture. Since getting his MFA from Calarts in 1993 he has been looking at various aspects of the landscape with an eye turned toward the urban system, its economy, and the perceptual field it engenders. His sculptural work employs complex mapping systems as well as architectural interventions to create an awareness of spatial systems. He received a CCF individual artist fellowship in 2006 and a COLA fellowship in 2007. His work was included in Eloi:Stumbling Toward Paradise at the California Museum of Photography, 2007; Utopian Mirage: Social Metaphors in Contemporary Photography and Film at Vassar College, 2007; Tomorrowland, Calarts in Moving Pictures at the Museum of Modern Art, 2006; as well as part of the Liverpool Biennial of 1999, the Prague Biennial of 2003 and the first of the Hammer Museum's mini-Biennials, Snapshot – New Art from Los Angeles. He is Assistant Chair of Otis College of Art and Design’s Fine Arts program.