Farrah Karapetian ruin is a real, rather than virtual phenomenon (Eight Seconds)
Paul Zelevansky LET THERE BE CHAIRS!
(An excerpt from The Book of Takes)
Renee Petropoulous Orange is never used. It is the color of fruits and not nations. (A Sense of Plaid)
Nate Harrison This newfound capacity to recode may be the Achilles heel of advanced capitalism’s representational schema (The Yes Men: Parody in Aesthetics and Protest)
James Welling When you go see Wyeth places, an unsettling phenonmenon occurs. (Hooks)
Natalie Häusler sigh gh (Kitchen)
Harold Abramowitz At that point I thought it important to worry. (from A House on a Hill (A House on a Hill, Part Four)
Shana Lutker Éluard slaps both Tzara and actor René Crevel in the face. Éluard is grabbed by stagehands and severely beaten, falling into the orchestra pit and shattering lights. He is taken to the hospital. (Some Fistfights of the Surrealists)
Stephanie Taylor & Alice Könitz Blessed squids pray! Shake a sprintz of dew– a mist lows, it shall! (A Leash for Fritz and Kale for Stray Bunny)
Frank Chang The two-volume dictionary was so large that no single printer in London could afford to source the quantity of paper and ink required (A Visual History of the Word ‘Patriot’)
Emily Mast 1. A book describes works that the author thought of, but that he never carried out. (English translation of Œuvres by Édouard Levé) 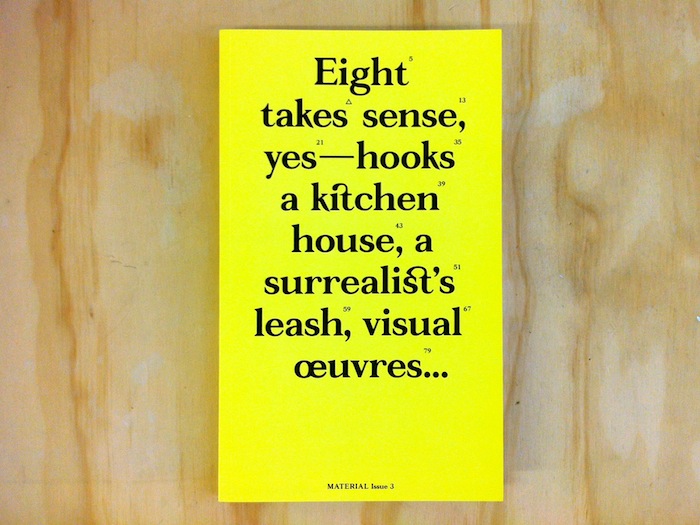 Harold Abramowitz is from Los Angeles. His books and chapbooks include (!x==[33]) Book 1, Volume 1 by .UNFO (collaboration with Dan Richert, Blanc Press, 2011), A House on a Hill (A House on a Hill Part One) (Insert Press, 2010), Not Blessed (Les Figues Press, 2010), and Dear Dearly Departed (Palm Press, 2008). Harold co-edits the short-form literary press eohippus labs (www.eohippuslabs.com), and writes and edits as part of the collaborative projects, SAM OR SAMANTHA YAMS and UNFO.

Frank Chang is an artist whose work explores the murky terrain between history and fantasy. His work has recently been exhibited at Co/Lab at Art Platform—Los Angeles and Collective Show: LA in 2011. He received his MFA from the California Institute of the Arts in 2005 and BA from Dartmouth College. He is currently based in Binghamton and Brooklyn, New York.

Nate Harrison is an artist and writer working at the intersection of intellectual property, cultural production and the formation of creative processes in modern media. His work has been exhibited at The American Museum of Natural History, The Whitney Museum of American Art, The Centre Pompidou, LACMA, and The Kunstverein in Hamburg, among others. From 2004-2008 he co-directed the Los Angeles project space ESTHETICS AS A SECOND LANGUAGE. Nate earned a BFA from the University of Michigan, an MFA from CalArts and is a doctoral candidate, in Art and Media History, Theory and Criticism in the Visual Arts Department at the University of California, San Diego. Currently Nate is on the faculty at the School of the Museum of Fine Arts, Boston, and lives in Brooklyn, New York with a lovely wife and two pesky cats.

A MacDowell Fellow (2010) and an artist-in-residence at the Wende Museum and Archive of the Cold War (2009), Farrah Karapetian earned her MFA from UCLA (2008) and BA in Fine Art from Yale University (2000). Solo exhibits include Roberts & Tilton (CA), Sandroni.Rey (CA), Geoffrey Young (MA), and the Kantor Gallery (NY). In light of her interest in photography in the spatial field, she has served on the board of SUPERFRONT, a non-profit promoting contemporary architecture for an interdisciplinary world, and contributed an essay, "On an Architecture of Survival", to a book, "Architectual Interventions" (Laurence King 2012). Her work has been reviewed in Artforum and the LA Times, and she lectures actively at Otis College of Art and Design, UCLA, and other California universities.

Alice Könitz is a sculptor. She received her MFA from CalArts in 1999 and her Akademiebrief and Meisterschülerbrief from the Kunstakademie in Düsseldorf in 1996. Her work has been exhibited at the 2008 Whitney Biennial, the Villa Arzon in Nice, LAX ART, Los Angeles, UCLA Hammer Museum, Los Angeles, the London Institute, London, Susanne Vielmetter Los Angeles Projects and Susanne Vielmetter Berlin Projects, Hudson Franklin Gallery in New York, Elizabeth Dee Gallery, New York, Wallspace Gallery, New York, and many other places. Her work has been reviewed in ArtForum, Frieze magazine, Flash Art, Sculpture, Art and Text, New York Times, Los Angeles Times, among others.

Shana Lutker lives and works in Los Angeles. She received her BA from Brown University and MFA from UCLA in the area of Interdisciplinary Studio. Solo exhibitions include Susanne Vielmetter Los Angeles Projects, Barbara Seiler Galerie in Zurich, the Suburban in Oak Park IL, the CCA Wattis Institute in San Francisco, Artists Space in New York; performances at SOMA, Mexico City, Performa 09, New York; and group exhibitions at Orange County Museum of Art, Mass MOCA and Lisa Cooley, D’Amelio Terras and Harris Lieberman galleries in New York, among others. She was included in the 2006 and 2008 California Biennials. Her work has been written about in publications such as Frieze, Artforum, The New York Times, The Los Angeles Times, ArtUS, and Art Papers. She is Managing Editor of X-TRA, an LA-based contemporary art quarterly.

Emily Mast is a visual artist who works primarily with people, movement and sound to advocate uncertainty as live sculptural material. In 2009 she presented a live looping play called “Everything, Nothing, Something, Always (Walla!)” for Performa 09 in New York. Her work has been seen at Mains d’Oeuvres in Paris, MUHKA in Antwerp, Samson Projects in Boston, and REDCAT, the Velaslavasay Panorama Theater, Human Resources, Steve Turner Contemporary, Blackbox and 533 in Los Angeles. In 2011 she was part of a symposium at the Museum of Modern Art in New York examining the role of the audience in contemporary performance art. She is also a writer and translator of French texts.

Renee Petropoulos has created projects and exhibited internationally. Most recently embarking on the project "Among Nations (Mostly)" with a performance "Analogue" (2012), and a set of book designs for Les Figues Press (2011). She has received numerous grants including the California Community Foundation Fellowship, a COLA Grant, A Ford Travel Fellowship, an Art Matters Grant. She has a B.A. in Art History and an MFA in Studio Practice from UCLA. She is presently Professor of Art in the Otis College of Art and Design Graduate Studies Department.

Stephanie Taylor is a New York City transplant, who moved to Los Angeles in 1997 to attend graduate school. She received her M.F.A. from Art Center in 2000 and has exhibited and performed her work internationally for over ten years. Her work is represented by Gallery Christian Nagel, Berlin-Antwerp and Marc Jancou Contemporary, New York. Recent events include a performance of The Stephanie Taylor Songbook, at the MAK Center for Art and Architecture, West Hollywood, as part of SASSAS’s series sound. at the Schindler House, and a group exhibition: Home; Revisited, Santa Barbara Contemporary Arts Forum (CAF). Her exhibitions have been reviewed in Frieze, Artext, ARTUS, Texte zur Kunst, Flash Art, Artforum, Modern Painters, and X-tra.

James Welling was born in Hartford, Connecticut in 1951 and grew up in nearby West Simsbury. Under the influence of Andrew Wyeth, Charles Burchfield and Edward Hopper he began to paint in watercolor. Welling attended Carnegie-Mellon University, the University of Pittsburgh and the California Institute of the Arts, where he received an MFA in 1974.  In 1976 Welling began to make photographs and in the early 1980s he was associated with the Pictures Generation in New York. In the late 1980s Welling began to exhibit in Europe and he traveled frequently to France, Germany and Belgium, where he produced significant bodies of work. In 1995 he returned to Los Angeles where his work has alternated between making abstract photographs and photographs that explore the idea of site.

Paul Zelevansky is an artist, writer, and teacher recently moved to Pittsburgh after 14 years in Los Angeles. He has a BFA in Painting from Carnegie-Mellon University, a Masters in Educational Technology from Columbia Teachers’ College, and was a member of a team that created some of the earliest digital interactive museum exhibitions (NY Hall of Science 1988-92). His PhD, also from Columbia, is in art education, and he has published widely on the use of text and image, web art, popular culture, and educational and aesthetic theory. His most recent book is 24 IDEAS ABOUT PICTURES, a primer composed of 24 visual/verbal propositions about the grammar, meaning, and metaphysics of pictures.