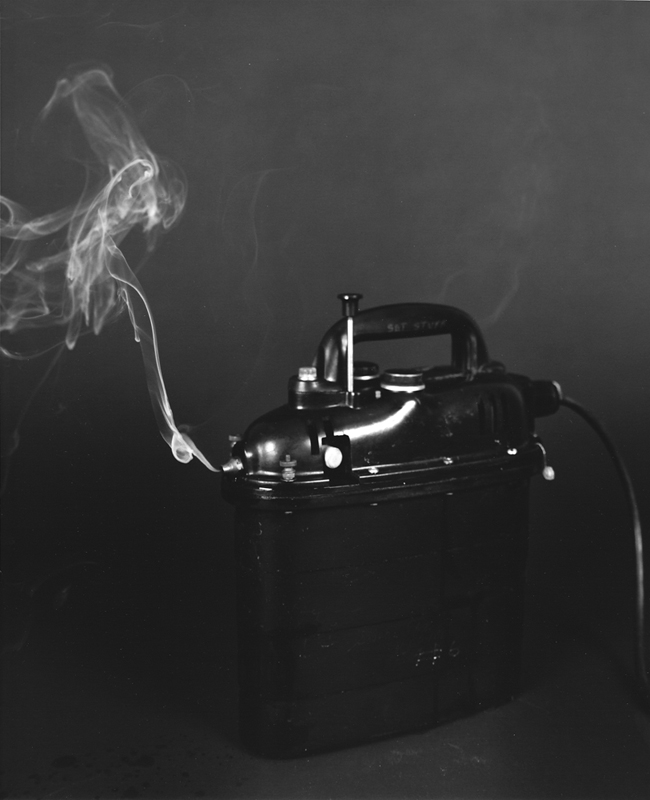 Wind variable coming from the SW
Shifting to the west.
Gusts to fifteen to twenty miles and hour
South swell two to three feet at fourteen seconds
Relative humidity sixty eight percent
At higher elevations snow possible above seven thousand feet
And a slight chance of rain and patchy fog after midnight

For sometime I have had the idea for shooting a film of a Mole fogger that slowly eclipses itself. The film starts on a black background with the fog machine barely separating itself from the backdrop; only by virtue of its glossy bakelite form does it appear visible. As the handle depresses, smoke rises from the nozzle. In time the smoke separates into a haze and the haze develops into a fog. It becomes hard to discern the source of the fog and everything is lost, and finally the frame is white. The film ends.

Fog machines from film noir to the horror genre have been used to elicit an emotional response and sets the unknown up as an expressed sensation to be met with reservation. I have always admired those that sought out and embraced the unknown, and looked to the horizon. Thoreau said that "a man only needs to be turned around once with his eyes shut in this world to be lost - do we appreciate the vastness and strangeness of nature. Every man has to learn the points of the compass as often as he awakes, whether from sleep or any abstraction. Not till we are lost – in other words, not till we have lost the world – do we begin to find ourselves, and realize where we are and the infinite extent of our relations.“

The fog machine pictured in this edition is taken from a short film that obscures itself through the duration of the filming. The device conflates itself as the subject of the work with the phenomenon that it simulates… the effect takes over and dominates the frame. Set Stuff # 6 captures the first breath of the Mole fogger.

Jed Lind is represented by Jessica Bradley ART+PROJECTS in Toronto, Canada. He has exhibited widely and has upcoming exhibitions at the Laguna Art Museum in collaboration with Russell Crotty, Pitzer Art Gallery, LM Projects and Jessica Bradley Art + Projects. Jed Lind received his M.F.A. from the California Institute of the Arts, Valencia, CA, and his B.F.A from Concordia University, Montréal, Canada. Jed Lind lives and works in Los Angeles.