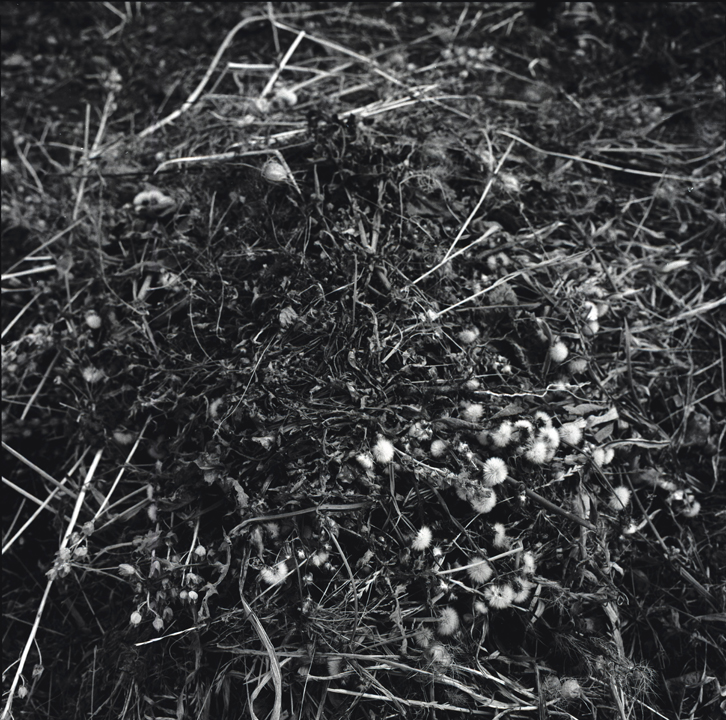 There is a mass in the centre of the image. It is composed of a combination of thistles, leaves and grasses. It gathers itself around an articulation of stems that interweave about a dark central configuration of forms. These forms recede into a depth beyond the ground of the image. The texture of the matter appears to be dry and brittle. The shapes of the leaves and stems fan outwards in twisted interpellations away from the central point. Between the stems an intense darkness obscures any further detail. Scattered throughout the body of the mass are round, soft seed heads, which are formed into circular spheres, the base of which are attached to a stem. From the stem expands an orb of thistle down. The down is constituted by an abundance of seeds that will disperse in the wind. The seed heads are concentrated towards the bottom right side of the image forming a small constellation that confuses space and dimension. They are woven between an array of grasses, stalks and leaves. The weaving helps to form the structure of the mass that rises upwards from the ground. At the bottom of the image long, light coloured stems project downwards in straight lines and curves towards the edges and out of the frame. This leads the eye outwards and back in again and off in different directions. An oscillation occurs between the centre and the periphery and between the surface and the ground of the image. The eye is unsettled. At the bottom left corner are a collection of different seed heads; they are smaller with pointed tops, their seeds contained on the inside. Towards the top of the image space recedes, creating a sense of distance. The focus becomes blurred. Stems form the perimeter of the mass and define its edges. It is circular in shape. Its convexity is undermined by the darkness of the centre into which the image falls.

Jessica Potter is an artist and writer who lives and works in London. Her work is concerned with the relationship between word and image involving processes of photography, writing and drawing. She is currently in the final stages of a PhD by practice in the Photography Department at the Royal College of Art, London. She gained her MA from Camberwell in 2004 and BA from Goldsmiths in 1999.